Distancing itself from UK data which put the Bulldog's median age of death at just over six years old, a spokesperson for the Bulldog Club of America insists that US bulldogs are healthier than those in England.

Great... so what is the average of age death for the Bulldog in America, then?

Er, they don't know. No one has done the work, or not recently at least - although US vet school data gathered between 1980 and 1990 found that the average age of death in Bulldogs was just 4.6 years.

But perhaps there is other data to support the BCA's claim in the article that US bulldogs are healthy? Well, no, there isn't. In fact, the OFA lists the Bulldog as the breed worst affected by hip dysplasia (over 70 per cent of dogs tested are dysplastic); and a recent paper exploring causes of death in US dogs found that the Bulldog was the breed most likely (18 per cent) to die due to respiratory problems and was only beaten by the Newfoundland as the breed most likely to die from congenital problems.

The New York Times' long and thoroughly-researched article, by writer Benoit Denizet-Lewis, is a real indictment of what we have done to the Bulldog and it makes for painful reading.  Breeders will no doubt find reason to dismiss the piece for including quotes from the the HSUS's Wayne Pacelle, but the testimony from expert after expert on the breed's many health woes is compelling.

Particularly worrying, for me, is that in 1973, the Bulldog ranked just 41 in the AKC's most popular breeds whereas in 2010 it was number 6. It is now the most popular breed in Los Angeles (where, surely, they can barely venture outside in summer?).

Of equal concern is that the Bulldog Club of America has no intention of changing the breed standard to encourage a healthier phenotype - and the AKC has no plans to make them, saying it trusts the BCA to "know what's best for the breed."

As such the US breed standard - depressingly - still calls for the Bulldog to have a "massive short-faced head", an "extremely" short face and for the head and face to be "covered with heavy heavy wrinkles" - features which are clearly detrimental to health and welfare and which have been moderated in the UK standard, although not without protest. (I should say that there is little evidence that UK breeders are taking much notice of the new standard, but at least it's in place.)

Incidentally, it's not the first time that Bulldog health has made the cover of a top US magazine. Time Magazine's 2001 "A Terrible Beauty" cover story caused huge ripples at the time. Have a look at that cover from 10 years ago, though, and what stands out is how unexaggerated the Bulldog on the cover is compared to many Bulldogs today. Underneath is a front-shot of a dog previously featured in profile on this blog - one of the top-winning UK bulldogs of 2011, Ch Pringham's Eclair Glace.  And underneath that, in case anyone thinks current US bulldogs are less exaggerated, is a US Bulldog featured in the NY Times article. 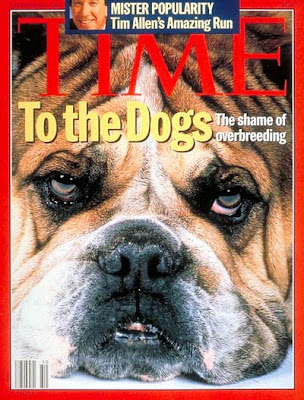 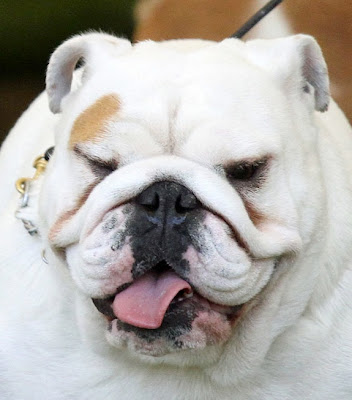 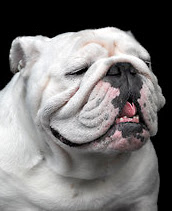 Posted by Jemima Harrison at 01:02