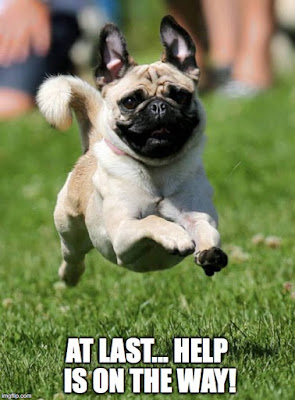 In an extremely strong statement regarding brachycephalic health, the Norwegian Kennel Club (NKK) has today admitted that the breeding of short-faced breeds has gone "too far" and has pledged to reverse the damage.

In response to what it refers to as  the "well-documented" health problems associated with a short nose, the NKK has committed to exploring/initiating the following measures for Bulldogs, Pugs, French Bulldogs and other brachy breeds:


The NKK has also determined to ensure the issue is discussed at FCI level and says it may contact the UK Kennel Club direct as the KC is the country of origin for several brachycephalic breeds (including, of course, the Bulldog).

It is a very happy day here at the PDE Blog and I want to say a big fat "well done" to the Norwegian Kennel Club for this brave and far-reaching statement - especially coming so soon after the ill-tempered denial from the Australian Kennel Club about the extent of the suffering in brachycephalics. (See here.)

There also needs to be a big well-done to all those who have worked so hard to secure change for brachycephalic breeds - including researchers, dog-welfare campaigners and those vets who have been brave enough to stand up and say enough is enough. Very significantly last year, over 1000 veterinary professionals in Sweden signed an open letter demanding change - something that has triggered a lot of discussion and a brachycephalic conference hosted by the Swedish Kennel Club a few weeks ago.

I'm delighted, too, to see the recognition that teeth/oral health is an important issue for brachycephalics. The PDE blog has taken a lead on documenting this oft-overlooked issue, largely thanks to the campaigning work done by Canadian veterinary dentist Dr Fraser Hale - see here and here.)

From veterinarians, concerns are frequently raised regarding suffering and reduced functionality among the brachycephalic breeds. The fact that a shortened nose creates a predisposition from problems are by now well documented.

The Norwegian Kennel Club has for a significant time focused on the problems regarding respiratory issues and problems with temperature regulation for the brachycephalic breeds.

The Norwegian Kennel Club’s work has so far consisted of the following:

Recently, the Norwegian Kennel Club board voted unanimously to intensify the work to improve the health for the brachycephalic breeds. The intensified efforts will begin this spring, and will include the following:

The Norwegian Bulldog Club has already done solid work to improve the health for their breeds, and have, in their Breed Specific Strategy, begun work to develop an endurance test.

This test is a tool to measure whether the dog has problems breathing and/or regulating temperature during activity, so that the healthiest individuals may be selected for breeding. Endurance testing has also been attempted by other clubs, but the Norwegian Kennel Club now wants to improve this test by using treadmills and measuring heart rate to establish a more standardized test. The treadmill is ready, as is the customized heart rate measurers, and the testing of the equipment will begin already this week. Shortly, the Norwegian Kennel Club and the Norwegian Bulldog Club will being the actual testing of dogs.

We hope that this test will provide an objective and scientific measurement of health, and therefore suitability for breeding. Hopefully, this will become one of several tools in the ongoing work to reduce the problems and suffering for brachycephalic breeds through selective breeding. We are aware that the short-nosed breeds also have other significant health issues as a result of anatomy, particularly with eyes and teeth. We believe that the improvement in anatomy as a result of the measures now being taken will also help in these areas, and this will be considered part of the evaluation process for all initiatives.

There is no doubt that several short snout breeds have major challenges when it comes to health, and that the challenges in this area is not consistent with good dog welfare. This is an important health issue we are going to sharpen the focus on in the future. The development of certain breeds should not have gone so far. Nevertheless, this very unfortunate development has occurred, and measures must therefore now be reinforced. It goes without saying that NKK should lead the way in this effort, and we have great expectations that our work will give good results, says CEO Ms. Trine Hage.

Posted by Jemima Harrison at 13:05