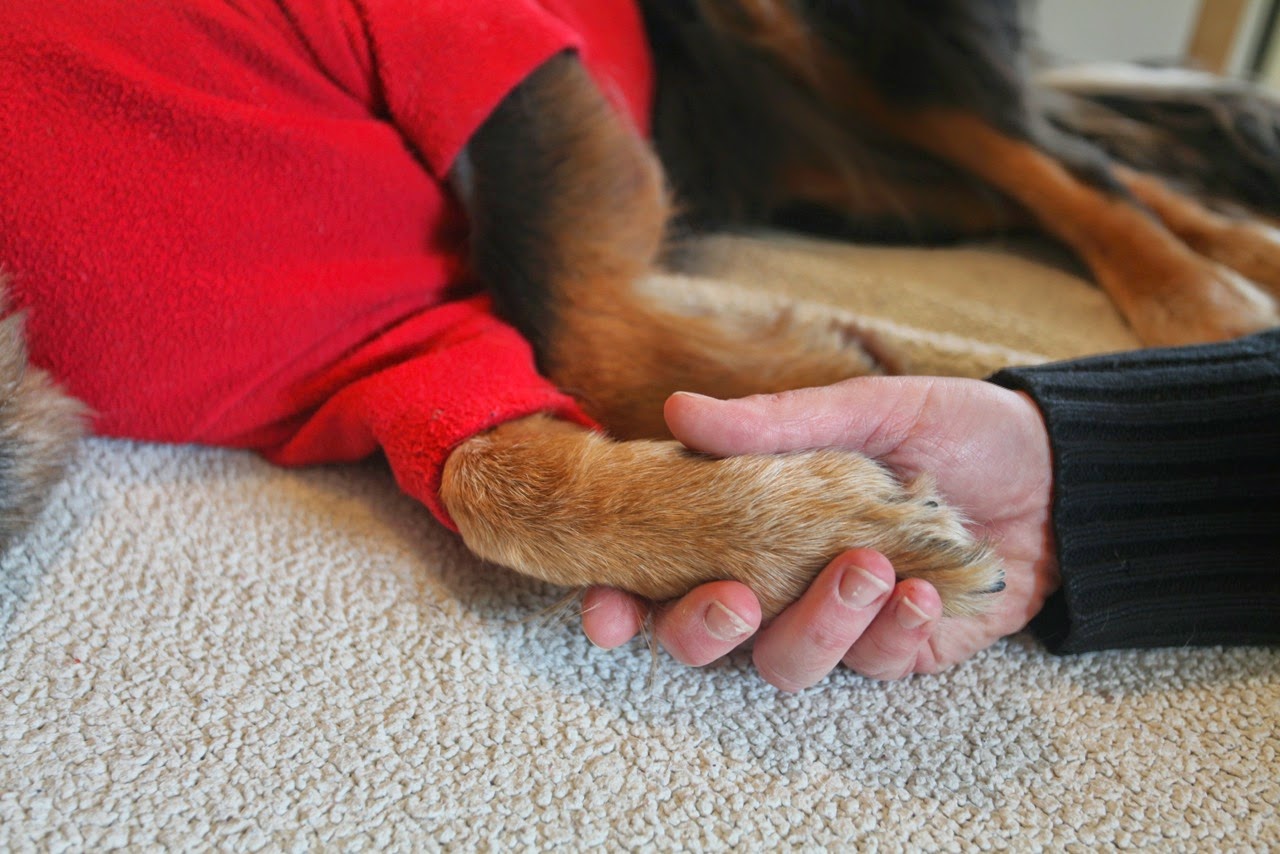 The death of a dog is always an intensely personal experience. But I hope you will forgive me one final post about Tickle - for today has been an extraordinarily special one.

When Tickle was put to sleep on Saturday afternoon, our vet Edward asked: "Are you taking her home with you?"

I really meant this. It's how I feel and, other than with my first amazing flatcoat Freddie (whose ashes still sit beside me here), I have always felt that the best place for a dead dog is in my heart, in my memory. I have never needed any physical remnant of a dog I have loved and lost.

So I walked out of the vets without her on Saturday afternoon. But I soon began to fret about it. And by Sunday night, it had begun to burn inside: I wanted Tickle back; back here with me.

I thought Jon would think I was mad. Instead he said: "No, I understand. She was lost before, and you brought her home. Now she is lost again.

I called the vets yesterday morning, knowing they would have put Tickle in their freezer after I'd left on Saturday.

She wasn't. The veterinary "disposal" company had done their rounds early and had taken her.

They said that because Tickle wasn't down for an individual cremation, she would be in an unmarked body bag, among several others. It would be hard to find her, they explained. But they asked for a description and said they would call back.

You hear so many nightmare stories about the disposal of dogs. Most of all I feared that, out of sheer expediency, they would tell me that I was too late.

But they called back two hours later to tell me they'd found her. It had meant opening several sealed bags. But they had read the blog and they did it.

A lovely lady called Georgie said: "We will deliver her back to your vets tomorrow morning for you."

I sobbed my thanks. The need to have Tickle back here with me had become all-consuming.

So that was yesterday and, this morning, Jon and I went to Hungerford garden centre and picked out a young tree  - a pear tree.  And then I went, on my own, to collect Tickle.

I confess I howled all the way there, filled with foreboding about how difficult it might be to see her dead. Now I am not squeamish, but Tickle had been in a freezer for two and a half days and then, on my request, allowed to thaw.

But the moment I saw her, an extraordinary calm descended. She looked OK. She was still Tickle. So - be warned - I am including pictures of my dead dog here.

Vet nurse Sam and I carried her out to my car in a dog basket. And then I picked Tickle up and placed her on the front seat of my car.

I drove home stroking her and talking to her. The movement of the car moved her body. She felt alive under my hand. And then I looked down and saw air bubbles coming out of her nose.  Of course it was just all the movement. But I confess for just a second or two I allowed myself the miracle before chiding myself for being so stupid.

When I got home, I carried her from the car and placed her on a blanket on the kitchen table.  The dogs came and sniffed her. They were very quiet. No doubt in my mind, they understood the significance of what was happening. 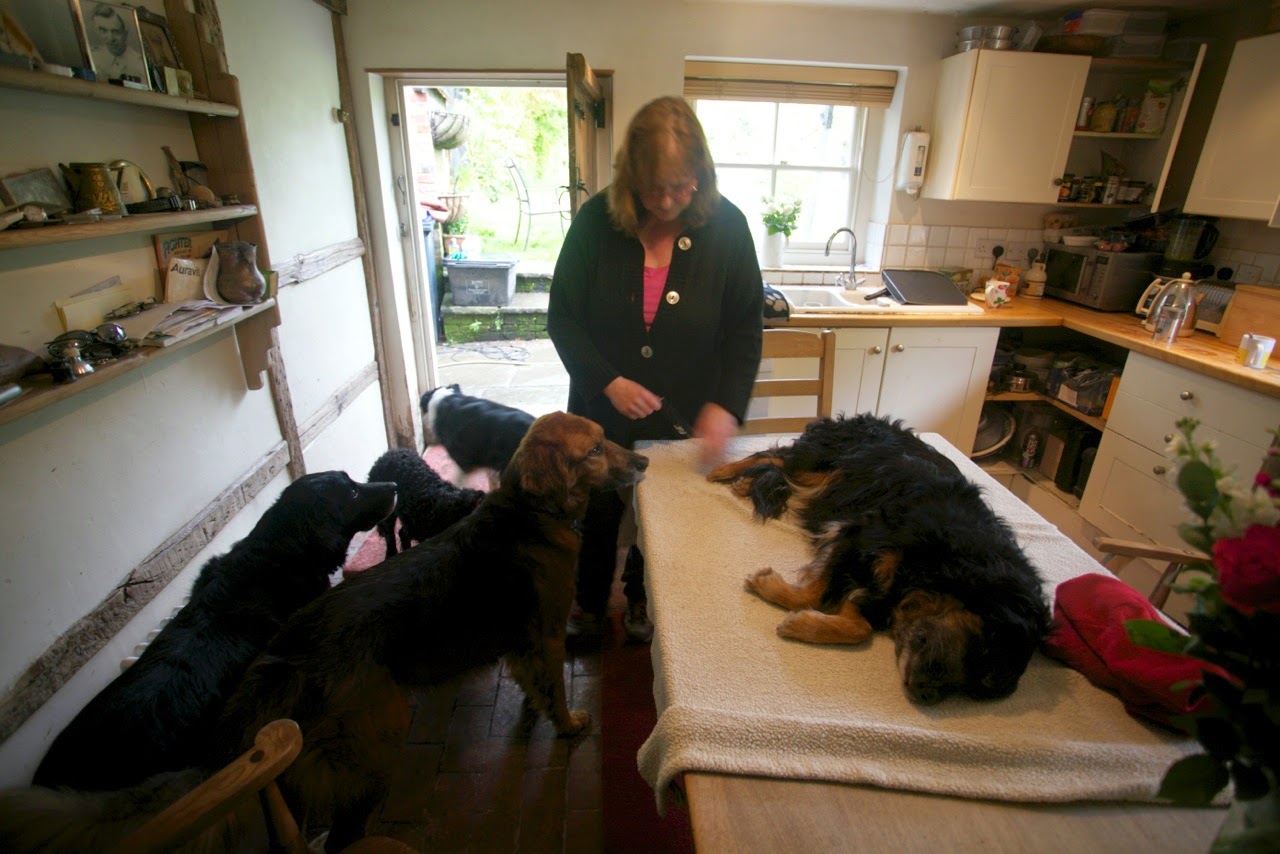 I then dressed Tickle in the red Hotterdog fleece that had swaddled her after she had broken her leg seven years ago, and carried her out to the grave we had dug in the garden. I laid her in it on a small foam dog bed and covered her with a soft blanket. We filled the hole and planted the pear tree. 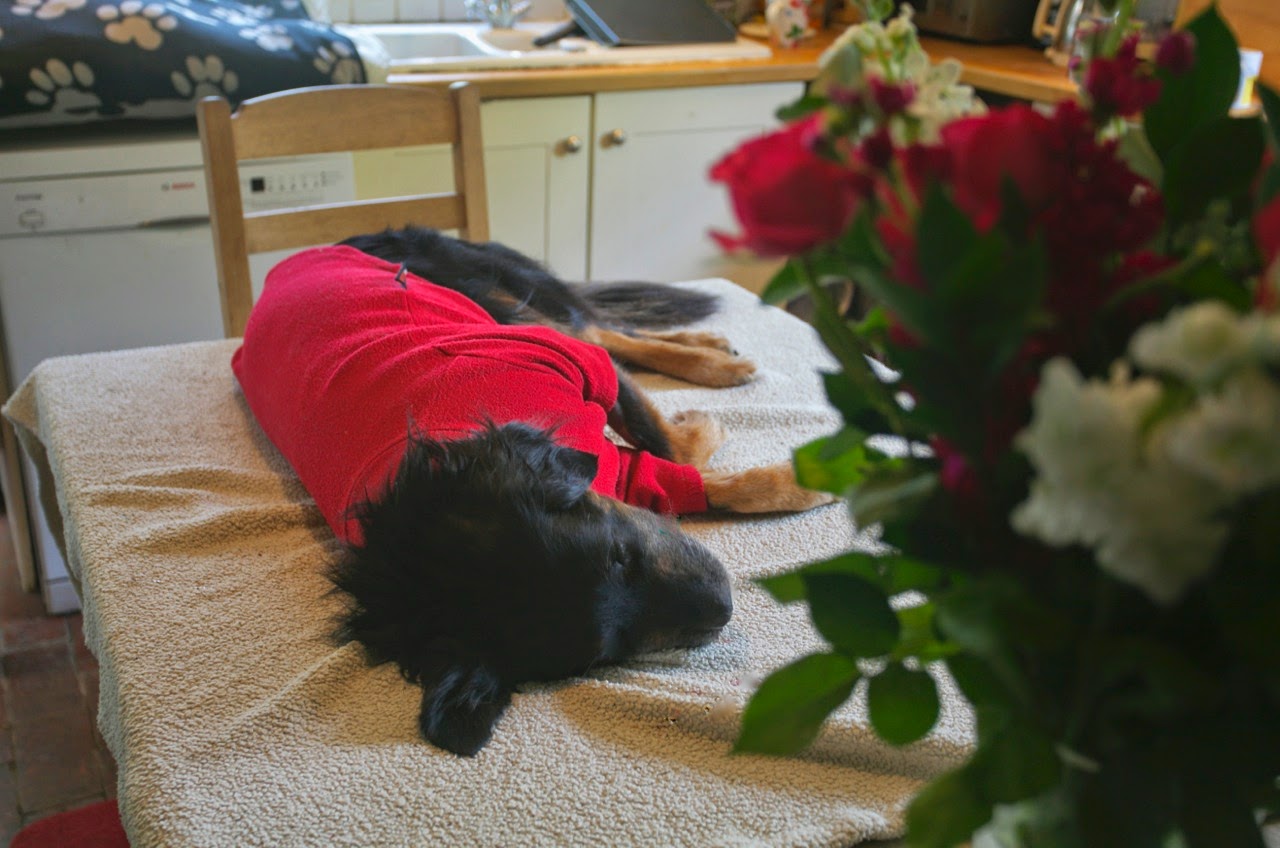 And then, just as we had finished clearing up and were standing by the grave, the skies darkened. 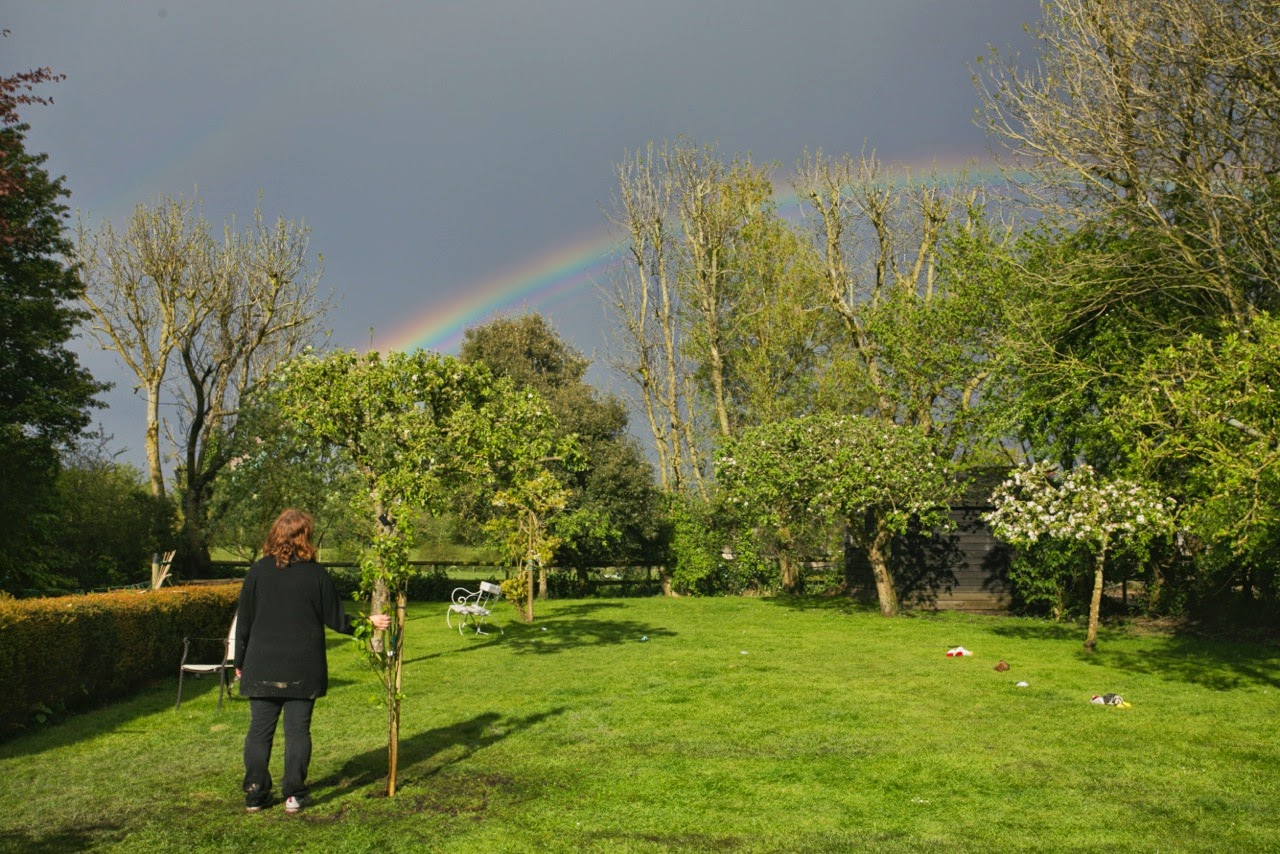 A little later, I drove down to the Plain with the dogs. That darned rainbow tracked me the whole way there, messing with my atheistic, reductionist head.

It was so comforting I laughed out loud.

Whoever or whatever was responsible for that.... thank you.

Tonight, as I take the dogs out for the last time before bed, I will pass Tickle and her pear tree and whisper goodnight to my beloved girl.

Tickle is back home with me.

Related post: My friend Tickle
Posted by Jemima Harrison at 00:13