Poodles - running out of time 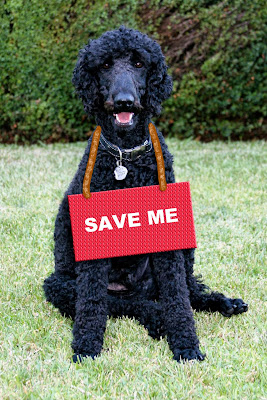 Poodles are so broke genetically that only a concerted international effort from those that love the breed will save it, warns the Institute of Canine Biology.

In a strongly-worded open letter to the Poodle Club of Canada, the ICB urges breeders to stop squabbling over cosmetic issues such as the banning of parti-colours or it will be too late for the breed.


"That breeders could even be seriously considering removing dogs from the gene pool of the breed because they have one copy too many of a recessive allele for a purely cosmetic trait is simply breathtaking.  It reveals a profound and fundamental failure to appreciate the very dire genetic situation this breed is in."

The letter in full:

Poodle Club of Canada
An open letter to the Canadian Poodle clubs:

We are dismayed to learn that there is organized resistance to the effort in Canada to remove the disqualification of particolor Standard Poodles and their progeny.

The Standard Poodle has been the subject of extensive genetic research over the last few years.  The data produced by this work are chilling.

The genetic diversity of the Standard Poodle has been reduced to the point where the immune system is seriously compromised. Without a competent immune system, dogs have no defense against the pathogens that we all encounter on a daily basis.  Further, loss of the ability of the immune system to distinguish between an external pathogen and its own tissue is being manifested as skyrocketing rates of autoimmune disorders such as Addison's disease and sebaceous adenitis.  These are horrible diseases for which there are no veterinary treatments adequate to restore an animal to normal health.  Genetic research can increase our understanding of the underlying pathology of inherited diseases in dogs, but there is nothing geneticists can do to "fix" this problem.  Many of the genes necessary for a functional immune system in Poodles have been lost from the breed's gene pool, and there is no modern technology that will restore it to proper function.

At this point, genetic salvation of this breed is going to require a concerted effort by breeders to reduce additional loss of genetic diversity to an absolute minimum.  That breeders could even be seriously considering removing dogs from the gene pool of the breed because they have one copy too many of a recessive allele for a purely cosmetic trait is simply breathtaking.  It reveals a profound and fundamental failure to appreciate the very dire genetic situation this breed is in.

There is no genetic technology that will restore the Standard Poodle breed to the good health that all dogs deserve.  This can only be accomplished by breeders, who must recognize that time is very quickly running out for this breed.  It is going to require a substantial realignment of priorities as well as an extraordinary level of cooperation among breeders around the world.  Geneticists can provide guidance in this process and there are many that are ready and willing to help.  But breeders need to know that it is possible to break something to the point where it cannot be fixed.  The responsibility to get this right is solely yours.
Carol Beuchat, PhDScientific DirectorInstitute of Canine Biology, USA&Department of Molecular and Cell BiologyUniversity of California Berkeley, USA

Finally, an organisation with two fully-descended testicles has stood up and called it as it is, rather than continue to pussyfoot round breeders with an appeasing grin and much hand-wringing about the need to keep everyone on board.

I am sure that Beuchat and her colleagues thought long and hard before writing a letter that so doesn't pull its punches. It should be hard to ignore given the quality of those signatures.

But there's no doubt that being this outspoken to dog breeders is a calculated risk. I know I won't be the only one holding my breath in the hope that it won't backfire.

The whole canine diversity movement was started by scientist and poodle lover , the late Dr John Armstrong. Thanks to his teaching (see The Poodle and the Chocolate Cake, written in 1998) and initiatives such as the Standard Poodle Project, the breed has been well-documented genetically. Indeed, Poodle breeders were among the first to embrace the need to reduce inbreeding - and the ICB's online course for Poodle breeders which started this week is, I hear, very well subscribed.

The ICB is also hosting an ambitious effort to create a global pedigree database for Standard Poodles - in fact being overseen by Mary Jane Weir, President of the Poodle Club of Canada (so one imagines she must be party to the above letter).  I'm a huge admirer of Mary Jane. She knows her stuff and has already done so much to raise awareness about the impact dwindling genetic diversity has on the immune system.

I hope the ICB now throws its weight behind a world genetics congress for the breed.

If Poodle breeders could come together now in an international conservation effort to show the rest of world how it's done, it would be amazing. And a fitting tribute to John Armstrong, who cared so passionately about his Poodles and wanted the world to care, too.
Posted by Jemima Harrison at 12:19