Nope, not my view -  the view being propagated by a Facebook site of that name that makes Pedigree Dogs Exposed look like a pussycat.

I've had a couple of emails/comments about the site - mostly from those pointing out how much those on it love me and cite Pedigree Dogs Exposed as justification for their hatred of breeders. (Ergo, of course, I am in some way responsible for the rabid views being expressed there.)

So I went and had a look there this morning and after trawling through post after post of truly poisonous stuff condemning all dog breeders, felt moved to leave what I thought was a fair and considered post.

I pointed out that although there were loads of bad dog breeders, and dogs suffering as a result of them, surely the site should be called "I hate bad dog breeders". After all, if they succeeded in stopping all dog breeding where on earth would the dogs they claim to love actually come from? I also pointed out that there was much to celebrate about good dog-breeding - e.g. the incredibly utility of collies, livestock guardians, police dogs et al - and that there are people out there doing a good job who should be encouraged.

The site had also posted a picture of a rescue dog that was now New York's top police dog, trying to argue that this trounced the argument that selective breeding was needed to produce the best working dogs. The dog? A German Shepherd...

Someone had also proudly posted a picture of their rescue dog and how amazing he was. The dog? A Rottweiller...

Finally, I ended the post pointing out that, surely, there was enough hate in this world and that the stuff they were posting was unfair and unproductive.

Now I really do defend anyone's right to say what they think on the internet - after all, it's what I ask for myself. But groups/pages that feel so threatened by alternative views, however reasonably-expressed, that they censor them are not campaigns, they are propaganda.  That's why I allow most posts slagging me off to be posted here.  I really do want people to make up their own mind.

Anyway, a little miffed, I messaged the page with the following:

"You deleted my post? Then please also delete any references to my film on your site. There is something profoundly wrong with groups that do not allow any alternative view to be expressed - especially when it was done gently. Jemima Harrison, Producer/Director Pedigree Dogs Exposed."


And they sent me this back: 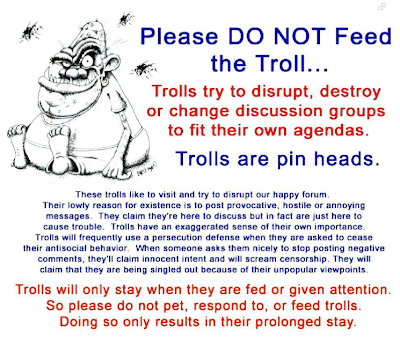 So now I am in the unexpected position of being loathed by both (some) dog breeders - and those that hate dog breeders.

I suggest you copy and paste the link to this post there in the hope that in the few seconds it will be allowed to stand that at least one or two people might get a chance to read how they are being sucked into group-think on a page that is blatantly censoring posts in order to peddle its views.

Before my post was deleted, it got two "likes". Of course that couldn't possibly be allowed to stand, could it?

Idiots. And dangerous idiots at that.

24/11/12:  Well despite being invited to re-post on the site I have been blocked from doing so...  And am amused to see a couple of posts hauling me out for my referring to Pedigree Dogs Exposed as my film.

"I wonder what the film-maker would think about THAT?" asked one poster.

But then putting two and two together and getting four is clearly not their forté.

Posted by Jemima Harrison at 15:55