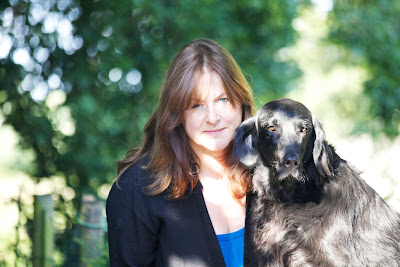 Maisie arrived in my life on the 16th February 2006 - a four year old working Flatcoat who was looking for a new home because of a temperament clash with two other dogs she lived with.

She came home with me that day and became part of our family... a wonderful, firm-but-fair foster mum to the dozens of rescues that have passed through our doors in the past six years. She was always an independent soul, though, and she was also the calmest, steadiest Flatcoat I have ever known. Economical. An observer who never missed a trick.

Maisie is also the dog that opened my eyes to the miracle of selective breeding when it is done right.

It was Maisie who took me out picking-up for the first time, who had me in awe at her skill and determination in finding shot birds and bringing them to me, across a raging torrent of a river once, despite not being the strongest of swimmers, not letting go of the bird once retrieved, despite disappearing underwater as she jumped in. On one other memorable occasion, she saw a pheasant fall in a sheep field and - never one to much listen to her amateur handler - set off to retrieve it, only to hit an electric fence that had been left on by mistake. I yelled to try to stop her but, a dog on a mission bred into her, she continued, picked up the bird and returned through the fence. There was a muffled cry as she hit it, but she didn't drop the bird and came and sat in front of me, her eyes proud and shining. 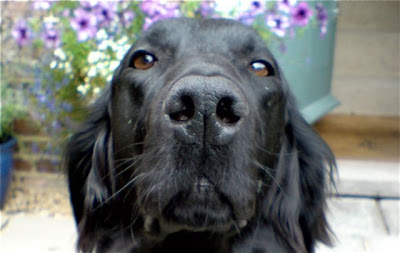 I've told this story before and my detractors leapt on it as evidence of what a cruel and horrid person I am. But, really, Maisie's unwavering grit is a tribute not just to the dog but to the generations of breeders that made her.

So since 16th February 2006, brave Maisie with the big heart has been my shadow. And today was the first day in almost seven years that I went on a walk without her. Through force of habit I kept looking back to check on her,  expecting to see her, as she always is, walking a few steps behind me.

But she wasn't there... not kicking the autumn leaves with her feet; not paddling in the chalky puddles on Salisbury Plain; not sneaking off after a rabbit when I wasn't looking.

And now I'm home, she isn't on the rug under the kitchen table where she always is; not hovering by the kitchen worktops, waitng for my back to turn so she can whisk an unguarded piece of toast into her mouth.

Nope. The fastest paw in the west is in a freezer at my vets in Marlborough.

A couple of months ago, Maisie started retching - just occasionally, like a touch of kennel cough; only it wasn't. And then about two weeks ago she started to find it difficult to eat the kibble part of her meals, preferring softer food. I took her to the vets. I thought there might be a problem with her mouth. But there was nothing obvious and when she wolfed with some relish the large biscuit the vet gave her, I tried to convince myself that I was imagining things. I turned down the offer of an x-ray and a sedation to examine her in more detail. I knew in my heart, though, that she wasn't right. But I also knew that at 11 years old I was not going to put her through too much to find out what it was. Not my Maisie, who hasn't had a day's illness her whole life.

And she's been OK... quiet, but still eating and still coming out on walks. She came out with me yesterday for 1.5hrs and jumped in and out of the car just fine.

Last night, though, she didn't want her supper and, during the night, I was woken by the sound of her retching. She'd thrown up bile. I lay with her a while on the wonderful Orvis dog bed in the hall. She enjoyed the stroking but then got up and took herself off to the rug under the kitchen table. Her place.

This morning, we returned to the vets. They examined her and looked glum. Well, she's a flatcoat, you see... And, hey, as we all know cancer in Flatcoats is as much a legacy of all that selective breeding as the ability to find and retrieve a bird.

They took some blood and while we waited for the analysis, Maisie jumped up on to the sofa in the waiting room and curled up with her head on my lap. The results were pretty dreadful - kidneys clearly in trouble and calcium levels through the roof. They said they could give her steroids to perk her up for a while. But I refused, and as she was so comfortable on the sofa, with her head on my lap, I asked if they could put her to sleep there. And so they locked the front door and lovely vet Edward  - always so gentle - inserted a canula into her leg and I hugged her, telling her how much I loved her, as the life ebbed from her. My Maisie, also known as Maisie Moo, Moody and Moo. Gone.

Afterwards, we x-rayed her and found a 5cm tumour between her lungs. It was pressing on her trachea and oesophagus, which explained the retching and the problems eating.  It is almost certainly lymphoma. I asked them to open her up and take some samples, which will be sent off to Cambridge Vet School for their research into Flatcoat cancer.

I will also register her death on the new Death Register for Flatcoats set up earlier this year by Cambridge.

Maisie - "Lyneholme Iris" - was 11 years old. Not a bad age, I hear you say. And that's true. And she had a healthy life full of love, good food, good walks, good fun.

But there are too many flatcoats that die from cancer; many of them much younger than Maisie. I'm too sad tonight to rage much about it, but breeders and breed clubs need to be doing so much more than they are doing.

It's wonderful that Cambridge has set up the Death Register, but insane that it has to be anonymous and infuriating that the Flatcoated Retriever Society here in the UK doesn't proclaim its existence on its home page (instead choosing to bury it three levels down). It needs to be properly publicised and more of an effort needs to be made to inform vets and pet owners that it exists.

It's also insane that so many flatcoat breeders play down the dreadful rate of cancer in the breed (over 50 per cent dead by on average 8/9) by claiming that other breeds would be found to be just as bad if only their breeders were as honest.

And it's even more insane that they think it is enough to give a few quid to the researchers in the hope that one day a genetic test will be forthcoming, while continuing to breed dogs, over half of which are programmed to die before their 8th/9th birthday - and some of them far younger. Last week it was a seven-year-old. Today, I heard about a two-year-old Flatcoat dead from stomach cancer.

What else should they be doing?

Well an open database for starters, with worldwide buy-in, so we can start to see the patterns in the pedigrees and openly select for longer-living lines - should they exist. We need full disclosure; ideally records kept of every Flatcoat born and died.

I believe we should also be thinking about MHC testing - a different kind of DNA testing, now available, that helps breeders select for stronger immune systems. After all, cancer is an immune-mediated condition.

And we also need to be thinking about some careful outcrossing. It may not prove to be the solution, but it is worth a try.

After all, what do you do with a poisoned river? You dilute it.

I'm afraid I don't do the Rainbow Bridge stuff - although I know it brings comfort to some. The only place Maisie is now is in my heart. And that heart beats with the hope that one day I can have a flatcoat in my life and not have to live with the fear that they will be taken too soon. 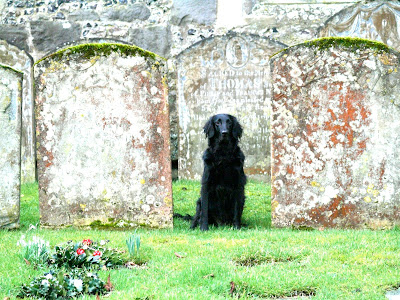 The pictures of Maisie in the beautiful graveyard here in Wootton Rivers, where I live in Wiltshire, were done for Pedigree Dogs Exposed over four years ago. We never used them in the film, but the picture of Maisie lying in the snowdrops above was used in the BBC brochure promoting the international version of PDE. Photoshopped on to the gravestone was: RIP The Pedigree Dog?
Posted by Jemima Harrison at 23:25