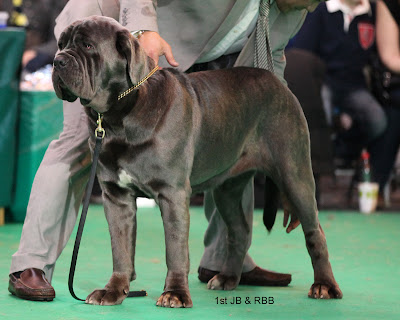 Normal service will doubtless be resumed shortly, but apart from a sharp post on the Canine Alliance yesterday, it's fast turning into a good news weekend on the PDE Blog.

I am delighted to report that Neapolitan Mastiff Nukualofa's Vaoila (pictured at Crufts, above, where she won Junior Bitch and Reserve Best Bitch) won Best of Breed at the Working and Pastoral Breeds Champ Show at Builth Wells yesterday - and passed her vet check with flying colours.

Vaoila does have ectropion, but with an otherwise clear eye with no inflammation or discharge, she was cleared to go on to compete in the Group. Although disputed by some, it has been made clear by the Kennel Club that ectropion (or indeed an old healed eye injury) in and of itself is not a reason for disqualification; there has to be some accompanying clinical sign of soreness or discomfort.

This is real vindication for breed health rep Kim Slater who resolved to run the gauntlet of the vet check should her dogs win at a champ show as she wanted to produce dogs that could pass the vet check. This stance provoked one or two nasty comments on Facebook from those who felt she should make a stand and refuse to subject her dogs to veterinary scrutiny.

Well done to Kim for standing her ground. Although I was disappointed to see her write this on the Exhibitors' Noise Facebook site today:

"....you can see quite clearly that this particular example is a plainer dog than all have become accustomed to seeing. She is 17 months old, but the important thing for us as a breed is that this dog clearly has what has become known as 'ectropion' and she has passed. The door is now open for dogs of heavier type with the same eyes to also pass if they also have the same strength in movement and skin." (my bolding).

I am hoping this is just Kim trying to soothe those in the breed who believe Vaiola is not "typey" enough to qualify as a top Neapolitan Mastiff.  The breed is deeply divided between the reformists and the diehards who want their Monster Mastiffs.

Interestingly, Vaiola came last in a class of three at last weekend's Club Show - under a judge clearly in the diehard camp.  An open show, not a champ show, so no vet checks there... evidence, perhaps, of how effective the vet checks are in encouraging judges to put up less exaggerated dogs; the exact reason they were introduced of course. In fact, I think I'm right in thinking that there hasn't been a single DQ since Crufts. Soft vets? Or better judging...? Time will no doubt tell.

I don't have a pic of the Best in Show at last weekend's Neapolitan Mastiff Club Show, but here are two pictures of the Reserve Best Dog when he won BOB at Crufts 2011 - the difficult-to-look-at-without-wincing Belkeiminter Marquinn.  I hear there were several people ringside shaking their heads in dismay. 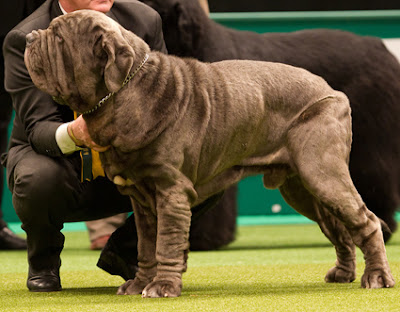 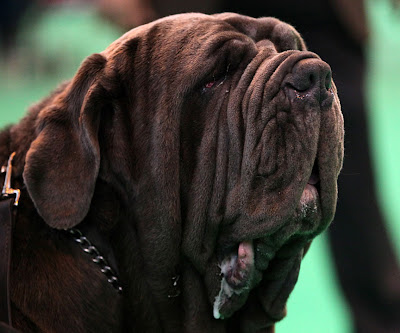 Posted by Jemima Harrison at 15:19