Will this Toller x litter save the breed? 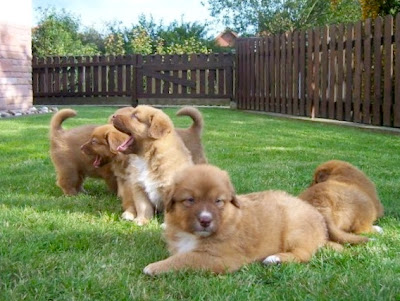 Hey, pay attention at the back... You're making history!

Having focused recently on irresponsibly-bred crossbreeds, it is a pleasure to report an outcross that could not be more thoughtfully-bred - and which offers hope to a breed some researchers say is in real trouble.

Although you may not be surprised to hear that not everyone agrees.

These pups (there are seven altogether, all males) are the result of a planned mating between Tessa, a Nova Scotia Duck Tolling Retriever, and an Australian Shepherd dog called Dakota. It is the first stage of a journey embarked on by German breeder Alexander Däuber to restore what he thinks is much-needed vitality to the Toller.

The spark for Däuber was, in part, the publication in 2010 of a paper by Finnish researcher Katariina Mäki who looked at the Toller's genetic diversity.

Mäki found that the average Toller was the equivalent of a full-sibling to any other Toller and that today's Tollers go back to just nine founders (and 50 per cent of them to just two founders). Mäki also found that the breed had an effective population size of just 18.  To put this in perspective, anything below 100 is considered of real concern by conservationists - and anything below 50 considered unsustainable, at least in wild species (although there are some exceptions that seem to be doing well, such as the Iberian Lynx).

Separately, other Finnish researchers found the Toller to have a low number of DLA haplotypes - (just 11 found so far) something that is thought to compromise the immune system's ability to mount a defence against disease, parasites and other foreign pathogens. Worryingly, one very common haplotype, found in 70 per cent of the breed, is strongly associated with imune-mediated rheumatic disease (IMRD), commonly found in the Toller.  Similar to lupus, it can cause persistent lameness, stiffness and palpable pain in joints. The breed is also predisposed to a related steroid-responsive meningitis arteritis (SRMA) marked by a high fever and neck stiffness.  Together, these two conditions have been dubbed "Toller Disease".

Mäki's conclusion - supported by several other geneticists, including Federico Calboli at Imperial College, London and  Professor Irene Sommerfeld-Stur in Vienna (one of the very first diversity proponents) - was that an outcross should be explored.  Their statements supporting the outcross can be downloaded here: Calboli,  Sommerfeld-Stur,  Mäki.

But the news was met with outrage from many in Tollers who vehemently oppose an outcross, feeling it is either unnecessary or would be the ruin of the breed (or both). And they have support from two very high-ranking geneticists: Clare Wade at the University of Sydney, and Danika Bannasch at UC Davis in the US.  Both breed and show Tollers themselves.

"I have been actively involved in research on inherited diseases in the NSDTR for eight years," says Danika Bannasch.  "This 'need' for an outcross is ridiculous. I have no issues with outcrossing when there is a clear purpose and scientific reasons for doing - ie the Dalmatian backcross. Tollers are in very good shape from a population genetics standpoint."

(I have asked Dr Bannasch for a more detailed explanation of why she believes Tollers are in such good shape genetically and will add here when she replies.)

Professor Wade, meanwhile, believes that the breed is being 'targeted' due to Toller breeders' willingness to assist researchers (they have, she says, been very proactive breed in terms of donating DNA and other information). "My observations are that the occurrences of genetic disorders in this breed are well below the norm for high population size breeds, let alone rare breeds. I am appalled that this breed is being targeted simply because the breeders have been open and interactive with scientists," she wrote in a statement opposing an outcross. "Any claims that this breed requires urgent out-crossing are ridiculous and I truly hope that such claims will be ignored."

Here are the facts re the Toller's genetic diversity:

• Nine founders
• An average kinship of 26 per cent (the equivalent of full siblings)
• Just 11 DLA haplotypes found - a possible indicator of immuno-incompetence.
• Evidence of a dysfunctional immune response in the high frequency of immune-mediated rheumatic disease (IMRD) and steroid-responsibe meningitis arteritis (SRMA), together known as "Toller Disease".

I confess I reserve a special sceptism for scientists who are also show breeders (while also acknowledging that it might also give them special insight in the breed) and find that Wade's claim that Toller breeders are being unfairly 'targeted' verging on paranoia.  I also find myself reacting strongly to words like "appalled" and "ridiculous" - not the measured response one would hope for from scientists.

And, really, why such an outcry? Is the sky really going to fall in - especially given that this outcross is being done with full transparency and with such apparently worthwhile aims?

Alexander Däuber has gone ahead despite the protests. He even managed to get approval from the German Kennel Club (VDH) - well, sort-of.  Initially, the VDH refused to sanction the outcross, but changed its mind after a high-profile debate on German TV and in the face of the quality of the support Däuber had garnered from the scientific community (Wade and Bannasch aside). However, Däuber felt that the conditions on which the VDH insisted were unreasonable - notably a requirement to run a DNA analysis that would have cost Däuber €20,000 (and which no other geneticist other than the VDH's considered necessary).


Däuber has, then, gone ahead using a non-VDH registered Australian Shepherd as his stud dog. (A breeder who allows his VDH-registered dog to be used would risk expulsion but given that only 20-30 per cent of German puppies are registered with the German Kennel Club there was a good choice of non-registered dogs).   Däuber has, wisely, used two older and health-proven dogs for his project - dad Dakota is six years old, with no health problems reported in his previous litters; mum is Däuber's own Toller, Tessa, who will be six in October. Both have been tested (and cleared) for all the health tests required in either breed.


The Toller x pups are now about a month old and Däuber says he has been struck by their vitaltiy. "They were more active in the amniotic sac and they quickly found their mother's teats and began to suckle. Many of the pups in my previous eight purebred Toller litters have been weaker, had less energy and had problems starting to breathe."

Däuber's aim is to try several different outcrosses - believing that the health of the individual dog is as important as the breed. On the cards are Toller x Retriever and Toller X Spaniel litters. He will then breed the best of the pups back to purebred Tollers - and expects to be back to full Toller 'type' within four generations. (In fact, it will probably be rather quicker given how similar an Aussie is physically; fine-tuned working abilities may take longer, though) "My goal is to improve genetic diversity and bring 'new' genes into the population," says Däuber. "I want to breed healthy Tollers with better vitality & fitness."

Däuber's story is being featured in an eagerly-waited documentary - being hailed as "the German PDE" - which airs in Germany this coming Monday (22nd).  Easily-offended purists should refrain from clicking on this link to the TV programme. I am pretty sure it shows Dakota and Tessa "tied", mid illicit union.

Oh, what the hell, let's reproduce the picture here: 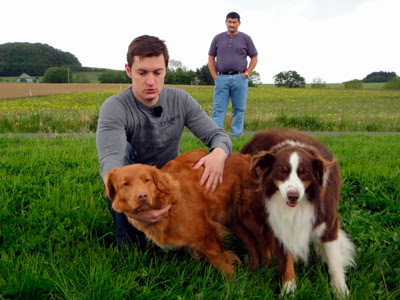 And here are some more pix of the gorgeous pups... whose progress you can follow on Alexander Däuber's website here: 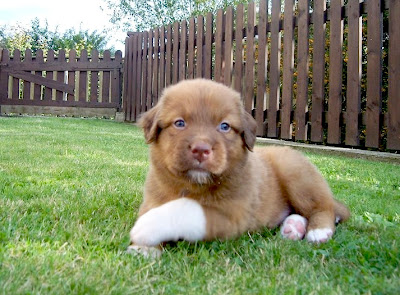 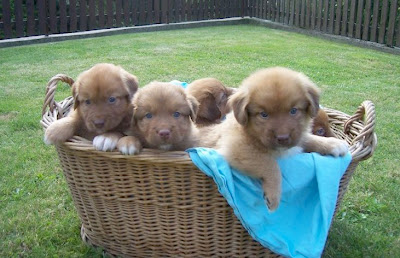 More to come on the Tollers shortly...

Edit 21/8/11 @ 20.42pm: removed reference to Alexander Dauber being President of the German Toller Club (the club has now disbanded).
Edit 23/8/11 @ 12.40: removed reference to Tollers possibly having fewer DLA haplotypes than other breeds - there are others with fewer - and added clarification/qualification re effective population size.

Posted by Jemima Harrison at 16:53