The extraordinary story of how the Boston Terrier lost its nose 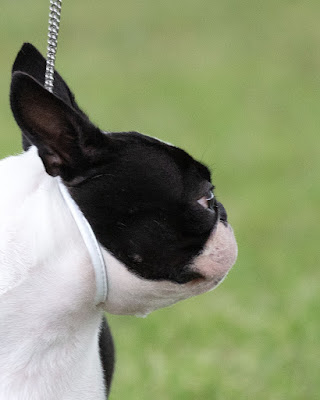 This photograph stopped me in my tracks this week. It shows Image Catcher of Ziost, who won the bitch CC at Crufts 2020 earlier this year. Her win is not a one-off. She has since been made up to a Champion.

As she's slightly turning away in the top pic, here are a couple more showing that her face really is very flat. 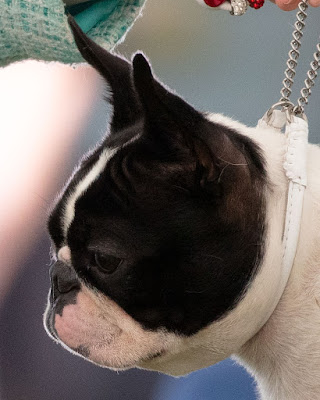 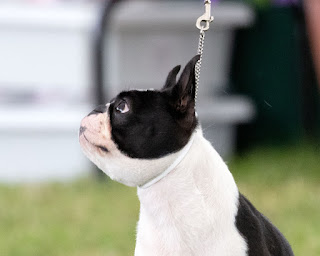 The reason it stopped me in my tracks is because the Boston used to have a muzzle and neither were their actual noses pushed back into the face like this.  Here's a champ from 1910. 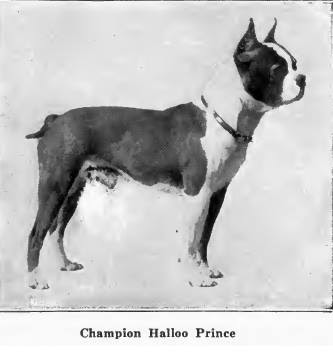 These winners are from around that time, too. 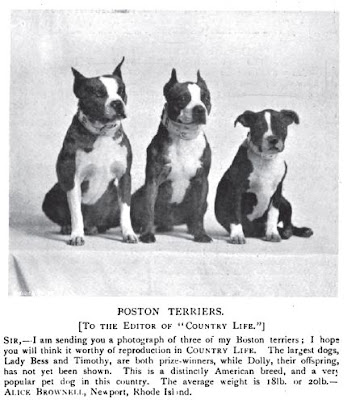 So how did a breed that once had a muzzle end up without one?

There are three main reasons. First is the pernicious effect of the show-ring which too often leads to exaggeration over time. Second is the cult-like lure of brachcycephaly that has transformed several breeds (and threatens several others). The third, slightly more surprising one, is that the breeders have full-on fucked-up in their reading of the breed standard.

Here's how it happened...

The Boston Terrier was first recognised in the US in the 1890s.

Below is a contemporaneous report and illustraiton of the 1898 Boston Breeders Club Dog Show (in Boston itself, I believe),where muzzles, albeit of various lengths, are very much in evidence. 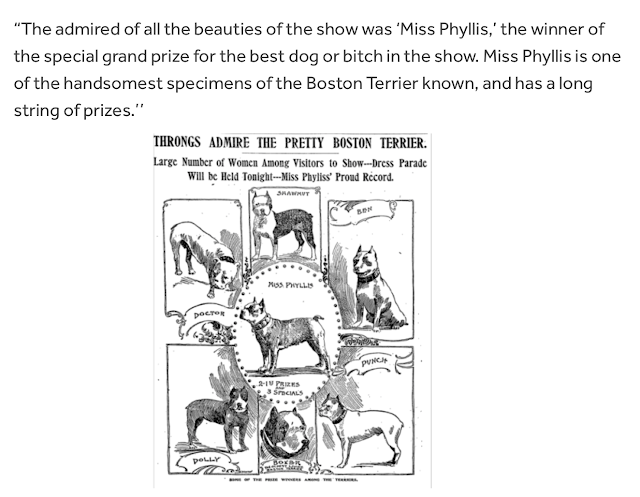 In the 1910 breed standard it states this:

Ten years later, there was a revision that included a max muzzle length (my bolding).

"MUZZLE - short, square, wide and deep, and in proportion to skull;' free from wrinkles; shorter in length than in width and depth, not exceeding in length approximately one-third of length of skull; width and depth carried out well to end; the muzzle from stop to end of nose on a line parallel to the top of the skull"

Also of interest in the 1920 standard are the head faults listed - too short a skull and a jaw that turned up (as in the Bulldog).


"HEAD FAULTS - Skull "domed" or inclined; furrowed by a medial line; skull too long for breadth, or vice versa; stop too shallow; brown and skull to slanting... Muzzle wedge shaped or lacking depth; down faced; too much cut below the eyes; pinched nostrils; protruding teeth; weak lower jaw; showing "turn-up"

In 1919, the National Geographic Book of Dogs described the Boston's muzzle like this:


"The face is intelligent, rather square, the nose, while short, is not pushed in, and the jaws are even, broad and fairly deep. He is in every sense a good practical dog."

And that, indeed, is what the accompanying illustration shows (here with a French Bulldog). 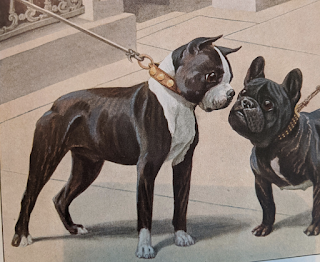 
"Conforming to outline to nearly every other part of the Boston's head, the muzzle must be square. It should be as perfect a square as possible, its width and depth and length being about equal; the "about" meaning that the slight deviation will probably take place in its length because, inasmuch as blockiness is a true requisite, the aim has ever been toward a short nose.  The muzzle should come out squarely from the stop, its length not exceeding one third of the entire head, that is, the distance from tip of nose back horizontally as far as the set-on of the ears, should measure three times the length of the muzzle."

"The muzzle is short, square, wide and deep and in proportion to the skull. It is free from wrinkles, shorter in length than in width or depth; not exceeding in length approximately one-third of the length of the skull."

And it also now allows an underbite, never a part of the original standard.

"The jaw is broad and square with short regular teeth. The bite is even or sufficiently undershot to square the muzzle"

We now even have some Boston breeders talking about layback - essentially a nose that recedes into the head like this, aided and abetted by the removal of an upturned jaw as a fault being removed from the standard. 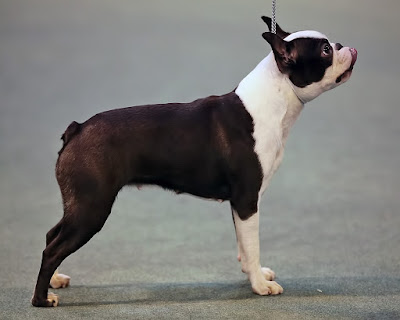 Unfortunately, the max-third demand is now interpreted by show-breeders as something to avoid at all costs and because too-short-a-muzzle has been removed as a head fault, there is nothing to prevent fanciers breeding the face off the dog.

On my Facebook group CRUFFA yesterday, a US Boston breeder interpreted the proportions of the Crufts winner at the top as being correct with this illustration. 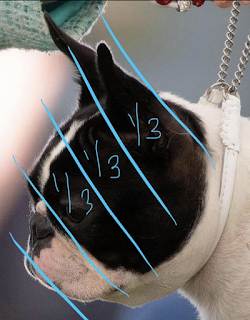 Leaving aside the fact that "muzzle" cannot possibly mean just the mandible (lower jaw), it is a plain wrong interpretation of the breed standard.

A dog's skull is not just from occiput to stop - it is the whole head, as E J Rousuck made clear in 1926, writing:  "The muzzle should come out squarely from the stop, its length not exceeding one third of the entire head, that is, the distance from tip of nose back horizontally as far as the set-on of the ears, should measure three times the length of the muzzle."

To suggest otherwise would be considered a nonsense by any anatomist. But sadly, we've seen this error also appear in other breeds where it has also been used to justify increasingly brachycephaly - "brachy creep" as we've dubbed it on CRUFFA.

Now it is true that there has been some variation in muzzle length over the years, and it is possible to find past Champions with a very short muzzle, only recently has it led to dogs as extreme as this dog, a show champion in the US. 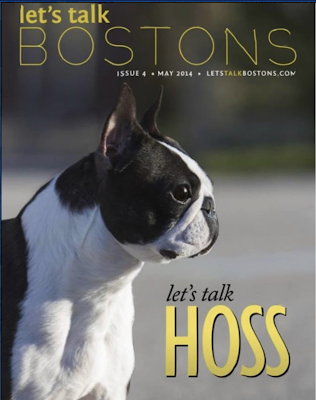 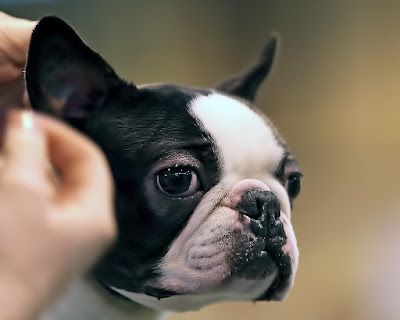 I recently spotted this breeder meme, produced in response to recent legislation in the Netherlands that prohibits the breeding of extremely brachycephalic dogs. 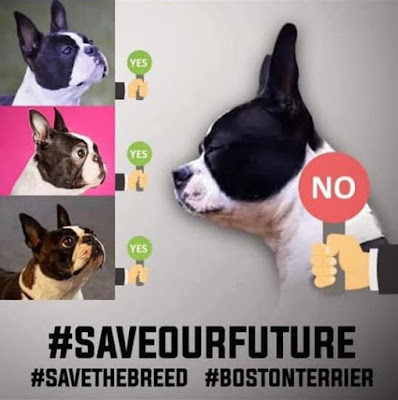 The irony is that if they had stuck to muzzles the length of the dog on the right, the breed would not now be one of the 12 extreme brachycephalics whose breeding has been restricted in the Netherlands.

In fact, Bostons like this (and yep, they do still exist) are fine to be bred in the Netherlands because they meet the demand for a muzzle that is a third the length of the whole head. It's perfectly within-standard, too, but show breeders would dismiss this dog as "pet-bred"... the wrong colour... and far too "snouty" 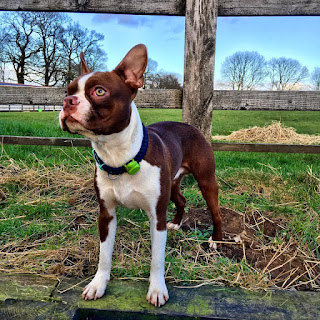 The latest trend is for show breeders to claim themselves "preservation breeders", apparently oblivious to the fact that the dogs they are breeding today often look nothing like the original dogs.  They will tell you the dogs are unchanged in 150 years, asking us to not believe our lying eyes.
So does it matter? After all, we know that the Boston is a better breather than its fleshier cousins the Frenchie, Bulldog and Pug.

But this is not just about breathing (although some Bostons do struggle). Dogs' muzzles are where you find their cooling system. Crush them and the dogs overheat. Brachy mouths are also almost always a mess with rotated/crowded/mismatched teeth - an under-recognised cause of trauma and pain. A lack of a muzzle also makes eyes very vulnerable - as admitted by the Boston Terrier Club of the USA.

"Because their eyes protrude and their muzzles are short, there is an increased chance over other dogs that they will scratch their eyes by accident. When walking with your Boston never allow them to come into contact with thorny plants."

So yes, it does matter. All dogs need a muzzle - as a physical buffer, as air-con and for a comfortable mouth.

• introduce a minimum muzzle length into the breed standards of breeds vulnerable to brachy creep
• KCs and breed clubs to educate and encourage honest debate about phenotypic changes in the breed, with an emphasis on what is and isn't an improvement from a welfare point of view
• more emphasis on the perils of shortening muzzles in judges' training
• add "brachy creep" to the KC's Breedwatch for the Boston (and other breeds where it is evident - eg Dogue de Bordeaux, Boxers, Newfies and sadly many others).

And a point of action for me personally: to give the Brachycephalic Working Group a kick up the bum. Set up in 2016 by the Kennel Club after a veterinary petition calling for brachy reform was signed by over 40,000 veterinary professional), progress has been glacial - particularly re changes to breed standards that were reported to be imminent more than a year ago.
Posted by Jemima Harrison at 16:20