The Croatian Kennel Club has just announced that it will no longer register LUA Dalmatians - citing that science is on its side.

The problem? The dogs are not pure!

LUA stands for Low Uric Acid - and it relates to a line of Dalmatians bred down from a single cross to an AKC champion English Pointer 40 years ago. The outcross was done to introduce a healthy version of a gene lost in purebred Dalmatians and it prevents the dogs from suffering from a painful and occasionally life-threatening health problem.

(For the historical lowdown, see this clip from Pedigree Dogs Exposed: Three Years On)

In their refinement of the breed, breeders of Dalmatians managed to inadvertently lose the healthy version of a gene that codes for uric acid production - the only breed of dog in which this has happened. As a result, there was no way to reinstate it in Dalmatians without an outcross.

Thus, the Pointer cross has simply restored an allele (gene variant) that exists in every other breed of dog. Indeed, after 20 or so generations, it is likely almost the only thing to remain from the original one-off cross. The added bonus in the LUA breeding programme is that the dogs have been well-documented/monitored by very health conscious breeders.

There are now hundreds if not thousands of LUA Dals being bred and shown, with both the American Kennel Club and the UK Kennel Club among those who have recognised and registered the LUA Dalmatians (albeit after an almighty campaign, including by this blog).  Via a reciprocal agreement with the FCI, these dogs have now been bred and shown across Europe and elsewhere for some years now - including in Croatia.

It is true that there were issues with the breed's all-too-important spots not being perfect enough for the show-ring in earlier generations, but today's top dogs are indistinguishable from 'normal' Dalmatians and are winning well in the show-ring, with the added bonus that they do not suffer from the painful and at times life-threatening bladder stones that effect at least 10% of 'normal' Dalmatians. Affected Dalmatians have to be fed a low-purine diet and find it difficult/painful to pee. At worst they can die from a blockage/burst bladder.

Now, the breed's country of origin has taken the insane step to ban them.

On the Dalmatian Club of Croatia's Facebook page they state:


"...we want to improve the breeding, breed healthy dogs and there's no place for mix breed... We just wanted to all let you know that LUA Dalmatians are huge NO in Croatia, mother land of Dalmatians."

Any similarity to German wartime rhetoric is of course, entirely coincidental.

The scrap is being played out on Facebook here and, rather amusingly, having stated that the dogs are 'inferior' and not to the standard, it turns out that one of Croatia's top breeders and judges gave one a great critique at a recent show. 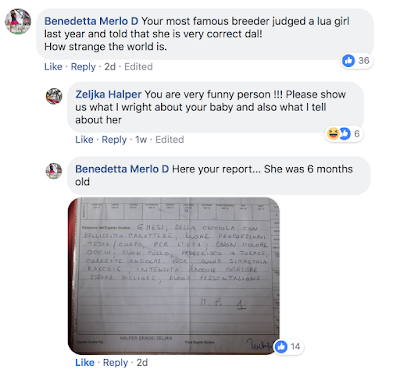 No, no response yet to this proof offered two days ago..

Let's be clear.  There is zero scientific rationale for not accepting these dogs - and considerable scientific and ethical reasons why the decision by the Croatian Kennel Club is retrograde madness.

Does it matter?  After all, aren't Bulgaria and Croatia minor Kennel Clubs?  Perhaps we should just let them be and get on elsewhere with breeding beautiful, healthy Dalmatians?

Well yes it does matter. Croatia IS the official breed's country of origin (disputable in fact if you really dig into the breed's history) and there is real and genuine concern that this anti-science nonsense could spread.

The fight to get the LUA Dals recognised was a long and fractious one, particularly in the USA. Unfortunately there are still those in the breed outside of Croatia who believe these dogs are mongrels and unwelcome. (Still no mention of the LUA Dals on the British Dalmatian Club website either....)

What we need now is a virtual scientific delegation to write to the Croatian Kennel Club asking them to reconsider on scientific and welfare grounds - and in particular to counter the extraordinary supporting statement written by a Croatian biologist called Krunoslav Brčić-Kostić.

You can read that here and frankly I don't know where to start. The man should be ashamed of himself. But basically, these are the reasons for advising that allowing the LUA Dals would be a bad thing.

I've already addressed the spotting issue, above. Re the possibility of introducing some deleterious alleles... well nothing has popped up yet and the outcross was done 45 years ago.  And finally, if he was a conservation biologist worth his salt, he would know that there is no need to "eliminate deleterious recessive alleles" - every living thing has them and they really are just fine unless you increase the chance of them meeting up by inbreeding inside a closed gene pool.  For a start, these alleles are rarely discrete entities that only code for one thing (eg the mutation for sickle cell anaemia also confers protection against malaria).

Nope. This has nothing to do with health and no one should be fooled.  It is all about purity at all costs.


"The Dalmatian Dog breed was not established in 1975 nor in 2005. It is a historical breed which traces to a distant past, and this should be respected. The formation of the Dalmatian breed was accompanied with the acquirement of genetic load for deafness and metabolism of uric acid. This was the only option since without that the Dalmatian breed would not be possible."

Makes my skin crawl. The reasons so many Dalmatians are deaf is because of human selection for a dog that is too white - and a specific requirement that they should not have coloured patches on their ears (which would be protective against deafness.) Plus it's perfectly possible that it is relatively recent selection for ever more perfect spotting that resulted in the the HUA gene in normal Dals becoming fixed. Historical images show a very different-looking dog.

Brenda Bonnet and the team at the International Partnership for Dogs would be well-placed to do this - perhaps with the support of Danika Bannasch who did so much of the original gene research on this issue, plus any veterinary associations willing to add their name?

Hopefully it will be possible to get this decision overturned.

Posted by Jemima Harrison at 14:04