"However perfect and beautiful the dogs might be on the outside, on the inside they are broken"

The video above is of a Dobermann called Bella. Be warned - the end of it shows her dying in the middle of a retrieve  "Bella..?" calls her owner as he sees his dog collapse and starts to run towards her. "Bella...!"

It is not a one-off. Many other beautiful Dobermanns die in exactly the same heart-breaking way because of a disease that now affects around 60% of the breed: DCM (dilated cardiomyopathy).

Dobes suffer from various forms of the disease and other heart issues too.  According to the available statistics, the average age of death for this breed is now between seven and eight years old.

Yesterday, Carol Beuchat from the Institute of Canine Biology came across the video of Bella dying and was so moved she stopped what she was doing to write this impassioned piece calling for breeders to re-focus on the root cause of the problem, not the consequence.


Our dogs are dying of inbreeding. Decades of inbreeding in a quest for the ever more perfect dog has resulted in the loss of genes that are essential to life. However perfect and beautiful the dogs might be on the outside, on the inside they are broken.

What are we doing about this? We seem to be doing a lot. There are research studies, DNA tests, health seminars, disorder-specific Facebook groups, and so on.


In 2002, Dr Reinhard Haberztti wrote: “The Dobermann was created from mixtures of various breeds and half-breeds at the end of the 19th century. This genetic variety was a great health advantage. Up to approximately 1950, there were practically no hereditary health problems, worldwide.

Yes, you read that right.

Less than 70 years ago, there were almost no known hereditary health problems in Dobermanns.

Carol references work done by Professor Sonia Garcia to conclude that without a change in breeding practices every Dobermann will have DCM by 2039. Every Dobermann. 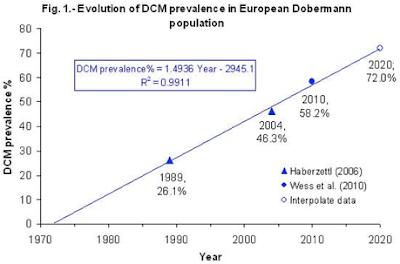 I have a particular interest in this breed because my boy Jake is a Dobe x GSD mix (with Dobe making up the most of his ancestry). He is 14 now and, without fail, any vet that examines him raises their eyebrows when they listen to his heart.

Because it's that strong; that steady, with none of the telltale arrhythmias that kill so many Dobermanns. Just luck, almost certainly, but outcrossing is probably the only way out now for this breed. 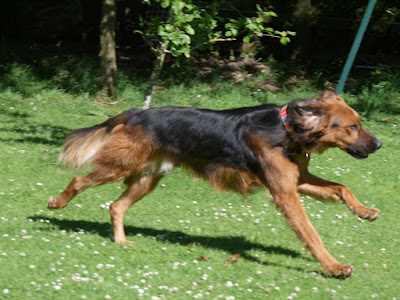 There are now a handful of Dobermann breeders talking about an outcross but, sadly, such a venture is very unlikely, currently, to be endorsed by the majority of breeders who have been indoctrinated into thinking that such a move would sully the purity of their breed.

Unless there is some unanticipated scientific breakthrough, the future of the Doberman is grim. Dogs will continue to be snatched from life by sudden heart failure, and owners will continue to come home from work to find their dog dead on the floor. The Doberman DCM Facebook group will continue to grow. The Rainbow Bridge will widen to accommodate the souls of the dogs that are dying too young....

DNA testing does not make somebody a "responsible" breeder. Caring for the heritage of your breed does not make you a "preservation" breeder. Pride and love and dedication are all terrific, but they will not prevent the heartbreak that awaits thousands of Doberman owners in the future. Breeders need to DO something about this. Breeders need to step up to the plate and acknowledge that continuing to breed dogs that are likely to die of a genetic disorder is irresponsible, unethical and inhumane. That is certainly how the average, everyday dog lover feels. This is also how I feel.

The Doberman was not created in its present form by a dog-loving God. It is a "blender" breed, created by a man who mixed a bit of this and a bit of that until he had the dogs he wanted. The breed was "recognised", the studbook closed, and the gene pool has been getting smaller ever since. Can the breed be saved by a cross-breeding program Who knows, but certainly it is worth a try and there is little too lose. But time is running out.


Read the whole of this incredibly powerful piece by Carol here - and if you don't know her work, please take the opportunity to explore the ICB website and what it offers to everyone interested in breeding healthier dogs.

Posted by Jemima Harrison at 13:21