Today, I heard of yet another young Flatcoat losing their life to cancer.  Millie, a search and rescue dog, was just five years old. Last year, someone I know lost two beloved Flattie boys within three months of each other - one was five years old; the other just three. As much as their owner loves the breed, enough was enough. She now has two spaniel crosses.

Contrary to popular perception, my life has not been much blighted by flatcoat cancer.  We did lose our lovely Pye (pictured above) to a cervical tumour when he was 10 but my first flattie, Fred (it's his picture at the top right of the blog) lived until he was 15 years old. My current flattie Maisie turned 10 in August. She is known as the fastest paw in the West - not for being fleet of foot (although she is quick enough when the occasion calls for it) but for the speed with which she can whip a piece of toast off the sideboard and into her mouth the moment your back is turned.

I hope to always have a Flattie in my life; but they will be rescues, not one bought as a pup. And that's because I believe Flatcoat breeders in the UK could be doing more to tackle the horrific rate of cancer in the breed (over half of Flatcoats will develop cancer by the age of 8 and it kills many of them).

There will be howls of protest at my saying this. The Flatcoated Retriever Society and breeders think they are doing quite a lot about cancer. Now it is true that Flatcoat breeders on the whole are health-orientated. Very few Flatcoats are bred without first being hip-scored and eye-tested, and many are elbow-tested too. Re cancer, over £60,000 has been raised since 1990 to fund ongoing research at Cambridge University into Flatcoat cancer - and the breed club helped source dogs for the cohort study linked to above which followed 174 flatcoats through to death.

I am disturbed that the Flatcoat Health Seminar this summer did not include anything on cancer. And I note that the Society's website doesn't actually mention cancer by name on its current health page. There is a link to the Tumour Survey, but it is just a line right at the bottom of the page.

Additionally, the Society's pdf on the Tumour Survey contains a number of inaccuracies - most seriously that the data they have collected had "dispelled the myth that [soft tissue] sarcomas occurred in young dogs."

It is true that the Cambridge research has found a peak in 8 year old dogs (and 8 was also the mean age of presentation) and there was another peak in 11-year-olds. But let's have a closer look at the figures here for the 32 dogs in the cohort study that died from confirmed soft-tissue sarcomas. 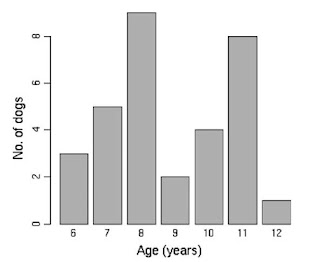 As you can see, 13 dogs died at aged 9 or over whereas 19 died at aged 9 or younger. And, crucially, this cohort recruited dogs between the ages of two and seven which could have skewed the data. The authors' rationale for this was that a previous study had found that few flatcoats under the age of seven had died of sarcoma. But this earlier study (Histopathological survey of neoplasms in flat-coated retrievers, 1990 to 1998, JS Morris et al) certainly didn't find that no young flatcoats died from cancer . Actually, the paper is a bit hazy regarding age detail, but it reports that 9 per cent of the dogs diagnosed with differentiated sarcoma were "young". Of the 10 dogs diagnosed with osteosarcoma, for instance, three were under two years old.

Certainly, there is a case for repeating the cohort study and making it a birth cohort, ensuring that Flatcoats that die young from cancer (and, anecdotally, there are many of them) are included.

Recently, a handful of cases of juvenile renal dysplasia in flatcoats has sent the breed club into a spin - disproportionately, in my view. But then it is a rather easier condition to talk about given a simple mode of inheritance and the availability of a DNA test (albeit one that has had validation issues).

It seems to me that cancer is the elephant in the room in Flatcoats - at least in the UK (perhaps US readers can fill us in on the situation there?). Yes, it is acknowledged but it is too often played down. With the researchers yet to come up with any answers that could prevent it, I think the problem is just that everyone feels utterly powerless.

But more could be being done: an open database of dogs (and their pedigrees) affected with cancer, for instance and - in particular - a more effective fund-raising campaign for cancer research. I dont want to diss the £66k raised so far but over 21 years it works out at only around £3k a year - not so much. An opportunity to donate online would be a big help.

I also think that it would be worth the breed club organising a group of flatcoats to be DLA haplotype-tested - something that the breed club turned down when I suggested it to them in 2010, saying they had limited resources and other health concerns to be spending money on. But this is a test that could help breeders breed for a stronger immune system and cancer, of course, is immune-mediated. The Society did agree to include mention of the test in its 2011 newsletter - not sure if it did or not but if it did, here's hoping it encourages some flatcoat breeders to explore.

There is a touching tribute to Millie here.
Posted by Jemima Harrison at 18:28