"Wrinkled skin, no legs and willies that drag on the floor" 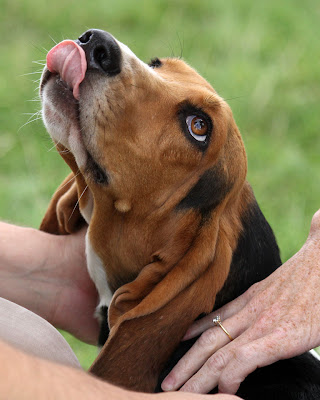 I have a weakness for dogs on which Nature has applied eye-liner. And when it has been genetically tattoed on a dog that does the work it was bred to do... gorgeous!

The dog above is a member of a hunting pack: the Albany and West Lodge Basset Hounds.  Here are some more pictures of them taken at their recent Open Day. 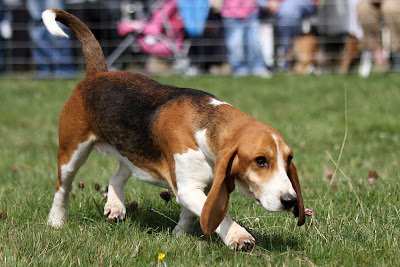 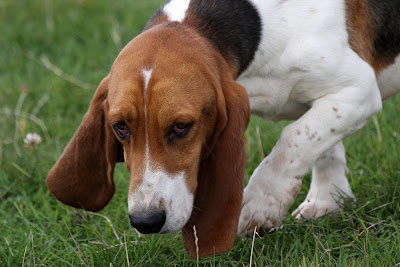 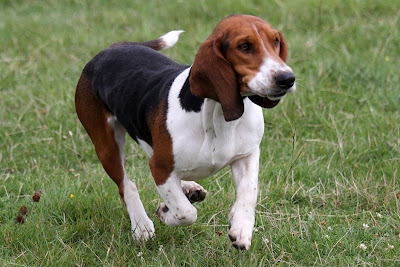 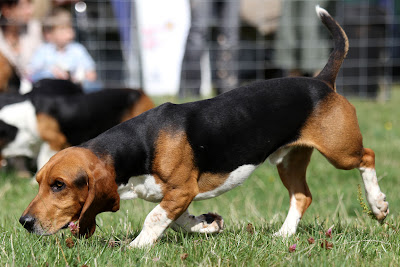 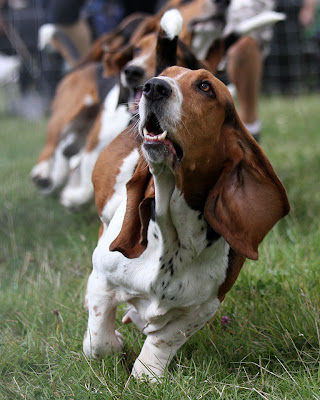 So now let's compare them with a young show-bred Basset that won Best Puppy at a recent championship show.

As you can see, this show dog bears little resemblance to the working-bred dog. The Albany Bassets have longer legs, shorter ears, no loose skin and although not all of them have perfectly-tight eyes, they do not have the obvious ectropion that you can see on this winning puppy.

I should say that burdening these dogs with too much skin draped on distorted skeletons is by no means the sole preserve of the dog fancy; many pet-bred Bassets are dreadful too.

So which is the real Basset. Well definitely not the Albany Hounds according to Dave Darley (Clavidar Bassets), who is Vice Chairman of the Basset Hound Club. This despite the fact that the Albany hounds still fulfil their original function when his don't.  Here's what he said in March this year in response to a post here on Bassets in March:

"There are some good looking dogs in the Albany Pack, but they are not Bassets. We dont "talk darkly" about their cross to Harrier, they are simply a cross breed and should be called "Barrier" or "Harriets". The Harrier itself is also a cross breed and has no KC Breed Standard unlike the Fox Hound that the Harrier is a cross breed of. So the Albany "Bassets" are a crossbreed of a crossbreed. How many more breeds would you like us to introduce into our breed but yet still let us call them Pedigree?? At least the Huntsmen who created the Harrier had the decency of changing its name."

This has not gone down very well with Alison Jeffers, Secretary of the Albany Bassets, whose Summer Newsletter I've finally got round to reading. In it she writes:

"Can you believe everything you can find on the internet? Apparently not! Take Dave Darley as an example. He's the current Vice Chairman of the Basset Hound Club. He has never met Jeremy (Master of the Albany Bassets) or me; he has never seen our hounds and he doesn't have any factual information about our breeding lines.


Yet he's quite hapy to blog away, making crass statements about our hounds in an attempt to 'explain' why Kennel Club show hounds look so different from our hounds.


According to Dave it's all because ours aren't Basset Hounds. They are mongrels! According to Dave and others, we have crossbred with Harriers and Beagles to create Albany Hounds, which he then goes on to describe as 'extremely poor versions of an Artesian hound'.


Like many people in the show world he makes statements that are not based on any truth. He should spend a bit of time looking through out stud book before declaring publicly what our hounds have been crossed with. If he did, he would find no sign of either Harrier or Beagle and I am sure he'll be quite 'shocked' at how much KC blood we still have in our hounds.


So if we can breed Basset Hounds that still look like hounds from the 1950s and are proven to be 'fit for purpose' why can't the Basset Hound Club? There's no logical reson as to why they can't. Within 2 or 3 generations most could be dramatically improved, it's just that many breeders don't think their hounds need to be improved, they like them just the way they are: wrinkled skin, no legs and willies that drag on the floor!"

Over to you, Dave and others in the BHC... Given that the Kennel Club has recently re-instated the old B-register, which allows you to bring in dogs from 'outside', how about going the quick-fix route - for the sake of the dogs - and crossing one of your hounds with an Albany?

Here, by the way, is one of Dave Darley's Bassets - with an Albany Basset for comparison 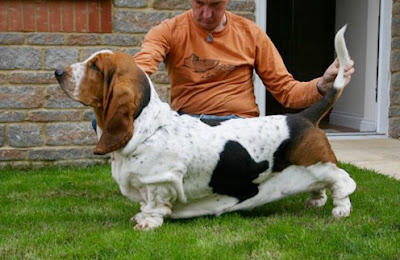 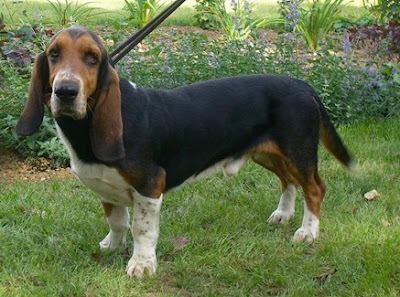 Posted by Jemima Harrison at 16:18